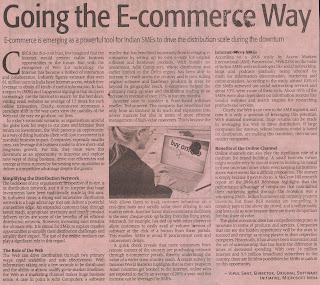 We need to imbibe the-state-of-the-art technologies in our day-to-day working. It adds to efficiency, transparency and reduces corrupt practices.

‘Going the e-Commerce Way’ is a good Article.

Helps in b2b-b2c-b2g working. http://www.b2bsvipja.com/ / http://www.indiandefenceindustry.com/ is an initiative in fulfillment of these thoughts. Keeps our Industry internationally competitive.

The US-India Business Council (USIBC) has named Mythili Sankaran, former CEO of Telecom /Web startup, Koollage, as director of its coast operations to advance US-India commercial ties in Western US.

The California office is dedicated to advancing US-India commercial ties in the Western Region of the US, including developing a more robust "two-way street" that enables US companies to succeed in India and Indian companies to succeed in the US, the trade lobby announced on Monday. Coming from the business world of the Silicon Valley, Sankaran brings to USIBC a wealth of experience in IT and Venture Capital.

"The Western United States has tremendous links to India and is presently under-represented. We are delighted to have Mythili head-up our operations in California," said Ron Somers, President, USIBC.

The USIBC, which seeks to deepen trade and strengthen commercial ties between the two countries, is hosted under the aegis of the US Chamber of Commerce, the world's largest business federation representing more than three million businesses and organisations of every size, sector and region.

--- IANS
Posted by Brigadier(Retired) Sukhwindar Singh at 7:52 PM No comments: